Welcome back! I hope you’ve all had a brilliant Christmas and enjoyed your holiday. We spent lots of time looking at the Christmas story, but today we’re jumping back to the Old Testament and the story of Esther. This takes place at a time when the Jewish people had a non-Jewish king. Watch the story of Esther to find out how she became queen…

If you have time, watch this slightly longer version (or just the quick version from 3.56!)

Why do you think Esther didn’t tell the king she was Jewish straight away? How did Mordecai save the king? How did Esther save her people? How is Jesus’s story similar to Esther’s?

Was there a time when you had to be brave? How did you feel?

Sing! This fun song tells the story of Esther and what happened when she was so brave!

The story of Esther is often told like a pantomime. Tell the story to your family – get them to boo and hiss whenever you mention Haman and cheer when you mention Mordecai or Esther! 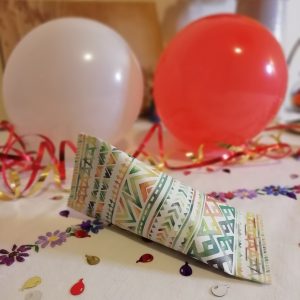 To help with the cheering and celebrations, make a noisemaker! Decorate a loo roll tube (or make a tube from paper or card – I used patterned paper for mine). Staple one end closed (ask an adult to help you with this!) and fill with something that will make a good noise – I used rice. Then staple the other end closed and give it a good shake!

Play this board game which is based on Esther’s story. You will need a dice a some counters. If you don’t have a printer, perhaps you could make your own version of the game to play!