Hi everyone! For those of you who are back to school this week – have a great time! Today we are continuing to look at some New Testament characters – watch this video for an introduction to Peter, another disciple.

Then have a look at what happened in Peter’s life after he met Jesus.

It’s interesting that Jesus changed Peter’s name isn’t it? Possibly a bit confusing too! Peter was a friend and follower of Jesus and he learnt from Jesus many things that he could put into practice after Jesus died and returned to heaven. Even though he pretended he did not know Jesus after Jesus was killed we can understand why, knowing Peter would have been terrified and his life in danger. The amazing thing is that Jesus knew it would happen but it did not change the way he felt about Peter. He was still his friend who he loved and he forgave him and had a plan for his life.

Peter’s life completely changed after he met Jesus in ways it might be hard for us to understand now. The Roman authorities were not happy with Jesus and his followers and sought to kill them. Peter needed to be strong in his faith – do you feel strong in your faith? Do you trust Jesus enough to follow him?

One of my favourite things about Peter though is that he actually got out of the boat to go to Jesus. I don’t think I would be brave enough, especially in a massive storm that even scared these hardy fishermen! I also find it amazing what happened to Peter some time after Jesus went back to heaven and Peter was put in prison. Something happened the night before his trial. Take a look at this first.

Then watch this telling of the story in theatre style.

My escape from prison was pretty easy as my guard was useless! Peter’s would not have been possible without God’s intervention. He was in a very serious and scary place, awaiting trial the next day which would have no doubt led to his death. Kings may have plans but God’s plan at that point for Peter was not finished and he still had a mission for Peter to complete. Did you notice that prayer made a difference too? Even though everyone was amazed how God answered their prayers.

Use this cockerel picture and follow the instructions to fill in the things Peter said. 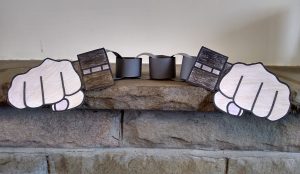 The template is here, and there are two sizes. Mine are the bigger ones. Just cut out the hands and the start of the chain and stick to cardboard if you want it stronger. Make your chain out of paper and you can make it as long or short as you like. Attach the chain and link the hands together.

Why not fill a big bowl with water or the bath and find some objects you think might float. Try them out and if they float grab a straw and see if you can blow them to the other side. A bit like walking on water. First one across is the winner!

Try and help Peter escape from prison. I have drawn you a map of his prison maze so you can get Peter from his cell to the exit. Which way should he take? Or is it a dead end?!

Thank you God, that Peter was brave enough to follow you and his sharing of the Good News back then means we can too, all these years later. Thank you for your love and forgiveness, for helping us when we are scared. May we see prayers answered this week. Amen